Why are South Florida drivers such assholes? And how you can help.

If anyone knows the esteemed multi-level marketing rep pictured above in her white Mercedes after cutting me off this morning, please thank her for me. (Kidding, I’ve blurred out her face because I’ve decided that I’m too nice to blatantly blast a person who is most likely another Boca mom, and because I’m a coward). But seriously, I’ve been super determined to blog two times per week, Wednesday nights and Saturdays. But last night I had total writer’s block. I just couldn’t come up with a good topic, a good story, or a good lesson to pair with it. You can’t force these things.

Fast forward to this morning. I’m sitting nicely at a red light with a reasonable, but not excessive, distance between me and the car in front of me (you know, to avoid a pile up if, by chance, I get rear-ended), when the Mercedes jets across 3 lanes to cut me off, squeezing into the gap between my car and the car ahead of me. As you can see (pictured), due to her poor planning and lack of space, this was not a typical cut off. She was bold enough to cut me off last minute, which required her to stop perfectly perpendicular to my car.

At first it startled me. She came out of nowhere when I had just, at the same moment, decided to let off my brake a little to inch forward. By the time the shock of her rocket-launch entrance wore off, I just stared at her the next 60-90 seconds while she did everything in her power to avoid making eye contact with me. Isn’t it funny how, when people are assholes, they think they can just avoid any accountability by evading eye contact?

Traffic was building up at the light as her car sat awkwardly in front of me, facing the wrong way, overlapping into both of the lanes beside me. But she just kept looking straight at nothing, not daring to turn her head toward me. I stared and stared at her just hoping she would turn and give the “my bad,” apologetic wave (and so I could give her the “WTF” stank eye), but nothing. What. A. B*tch.

But then… like a gift from the blog gods, this blog’s topic arrived to my head. Why are South Florida drivers such assholes? And in the name of public service, how can I use this platform and experience with asshole drivers to help my community. That’s what it’s all about folks.

My first real experience with the asshole drivers of South Florida was on my very first drive to work from our temporary apartment in Parkland after moving here three years ago. It was a quiet intersection. Literally, me and the guy behind me were the only souls in sight. I was sitting at the red light, and it turned green. Mind you, I wasn’t texting, daydreaming, or checking for food in my teeth; I literally watched it turn green. Being a good driver’s ed graduate, I immediately took the next ½ second to glance left and right to make sure there weren’t any red-light runners who could potentially t-bone me. But by the time I turned my head to the left (now ¼ of a second after the light changed), the asshole behind me slammed on the horn.

Really? I thought. IT JUST TURNED GREEN! Where is all your rage coming from?!?!

I was in disbelief and thought it was a one-off event, but in the time since then, I’ve seen or had this happen at least on a weekly basis. Between that, people cutting each other off, and the fact that NOBODY here pulls over for emergency vehicles, I’ve got serious beef with the driving habits down here.

Do you agree? Pin it! 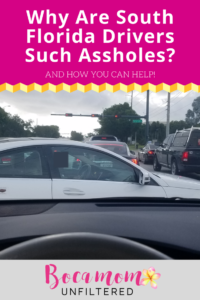 So, what the hell is the problem?

The root of South Florida’s shitty/rude driver endemic is a hotly debated topic. I’ve heard a lot of “explanations” ranging from the surplus of senior citizens, to the mass population from the north-east US (especially New Yorkers.. sorry friends, I’m not making this up), to the diverse collection of immigrants from Latin America countries where I’m told it’s much worse than it is here. In my experience, it’s probably the perfect storm of all of these factors. You have people who are too old to meet the basic reflex and vision requirements to be operating a 2,000 pound rolling weapon, people who are either used to insane traffic conditions or have never driven at all due to city life, and people who come from a place where traffic laws are more of a “recommendation.”

With all of these deficiencies in mind, I’d like to offer a few tips to my South Florida neighbors which I believe, if followed, could really improve our community and safety.

If you’re going to cut someone off, ask first.

You know that guy or lady from the red light that waves her hands at you with a smile on her face. At first, you worry that something’s wrong (maybe your gas cap is off?) But when you make eye contact, they point their finger slightly ahead of your car with a regretful, desperate face, Can you please let me in?

I’ve got news for you. Nobody says no to that person. Even if I want to say no to that person, I’m too nice to do it to their face, so I let them in then swear about it privately under my breath. The thing is, that person was a poor planner. They should have switched lanes sooner. They should know what the hell they’re doing. But at least they had the balls to fess up to their oversight and politely ask for a little grace.

Be that person. It takes a little humility, but we all need to get a little more comfortable being uncomfortable anyways.

Here in South Florida we have a bizarre endemic known as premature honking. I get it. We live in a world where everyone is Facebooking or texting at the red light so it’s not uncommon for a person to be slow to get off the start line.

If you are behind a person who you suspect is distracted, give them the benefit of the doubt for 5 seconds. 1 – 2 – 3 – 4 – 5. Are they still sitting there? Give the horn a gentle honk. Not one of those aggressive honks that indicates somebody almost killed you. They will appreciate the heads up. You will appreciate the opportunity to move ahead. And I promise, those 5 seconds will make no difference in your life.

Pull over for emergency vehicles, PLEASE!

Allow me to take a break from my regular humor to beg for your attention here. I love South Florida. There are so many wonderful things. But this aspect of South Florida culture is absolutely disgusting. Not only do I never see the population pull over for emergency vehicles, I’ve seen on more than one occasion, cars trying to PASS ambulances (ambuli?) while they are using their lights and sirens. It’s so appalling.

On behalf of your grandma, anyone you know who has ever been sick or in an accident, or your future self who may one day need urgent medical care, please do your part and pull over for emergency vehicles. It is the law, but that’s not even the most important part. Every time I see the crowds of cars not getting out of the way, I picture someone dying because they got to the hospital 30 seconds too late. I know that’s a sad image, but if that’s what it takes to get you to pull over, I’m good with it haunting you.

South Florida has so much to offer, including amazing aspects of community. We’re so great at doing the right thing when everyone’s looking, but for some people, basic decency goes out the window when they’re behind the wheel. I’ve got news for you – the car does not make you invisible. Next time you’re tempted to be a jerk behind the wheel, imagine that the person in the other car is your kid’s teacher, your doctor, the really sweet lady that does your nails. Would you still be an asshole?

You know they deserve to be treated better than that.

‹ Yes, I have my hands full with this crazy family › What kind of mom blogger are you? + Bonus video on making your own delicious homemade coconut milk and flour (It’s sooo good!)